In his own words.

I was born in Pardubice, Czech Republic. My father was the manager of an industrial distillery. My childhood memories are of life with my father and mother. I attended public school. 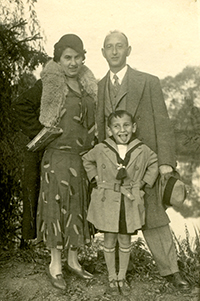 After German occupation, in March 1939, Czech Republic became part of the Third Reich, its name changed to Protectorate of Bohemia and Moravia. All the German Laws and anti-Jewish orders became valid there. Instead of attending school I was forced to clean city streets and military barracks. On December 6, 1942, all Jews of Pardubice were deported to ghetto Terezin. I worked there as a locksmith, my mother was in charge of meal distribution, my father disappeared in Magdeburg barracks, in the vast ghetto bureaucracy.

My father and I were sent to Auschwitz-Birkenau on October 1, 1944. My mother followed on October 12. I never saw my parents again. I was sent from Auschwitz to one of its subcamp, Gleiwitz I., where about 1,400 prisoners repaired railroad rolling stock for Reichsbahnaussbesserungswerk Company. The camp was evacuated January 18 and we marched for three days to Blechhammer concentration camp. Next day this camp was emptied. Some prisoners, I among them, succeeded to escape a further death march and were liberated by Soviet soldiers. 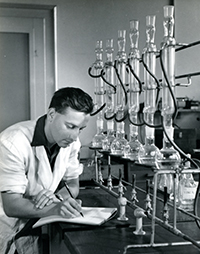 I remained in Poland during the winter and spring of 1945 and returned to Pardubice at the beginning of May. I finished there my High school education and passed the final exams, moved to Prague and in September ’45 enrolled in the Technical University to study chemistry. I graduated in January 1950 with MS in Chemical Engineering and after three years of graduate studies received a PhD diploma in Biochemistry and Microbiology.

I worked as research scientist from 1953 until 1969 in several Research Institutes in Prague and have published numerous scientific papers and patents. I was awarded State Prize of Czechoslovak Republic in May 1968.

When in August 1968 Soviet Union and Warsaw Pact countries invaded Czechoslovakia I decided to leave the country, at least temporally. I accepted invitation by the Dean of Science of SUNY Plattsburgh and joined the faculty as a visiting professor. When the new Czech government cancelled previously issued permission for me and my family to stay in United States for one full year and ordered us to return two months earlier I refused. SUNY welcomed my decision and changed my status from “visiting” to “tenured”. I retired in 1990 after twenty one years of active teaching. 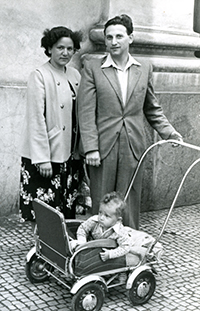 I met my future wife Kitty Lowi  in Terezin, when she was 16 years old. We were separated in October 1944 when I was deported to Auschwitz, but reunited again in May 1945, only to be separated again in the Spring of1947, when Kitty and her parents emigrated to  United States. When, in June 1949, Kitty reached 21 years of age, she returned to Prague and we were married in November. We have to sons, Peter (1950) and Paul (1956). My family accompanied me to United States in 1969. Both sons finished their education here, got married and have children. My wife died of complications from Alzheimer’s disease in January 2015.